Draw and Tell by Duck, Duck Moose is a very simple iPad app that enables children to draw, create, use their imagination and get talking. Duck, Duck, Moose was taken over by the Khan Academy recently and therefore the app is now free. Children can draw pictures in the app using a range of tools including brushes, crayons and pencils. Their art work is developed on a variety of background papers and styles. There are also stencils and stickers that can be used to build up a scene or illustrate a basic story. Once children have created their picture, they can record sound to go with it. It is this simple pairing of sound and image that gives the app its power. Children can also move their stickers whilst they are recording to animate their pictures. Their creation is then saved as a video that can be exported to the camera roll and then viewed or shared like any other video. 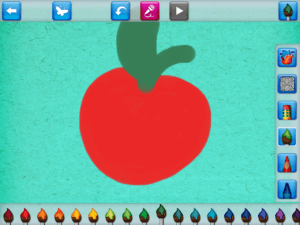 There are some less positive aspects. The music that accompanies the app can prove rather irritating. However this can be muted on the first screen of the app, by clicking on the music symbol in the bottom left corner of the screen. Also, the app is American, so the basic verbal instructions provided, are communicated in an American accent, which can be a little less familiar if you are teaching outside of the United States. Finally in the stamps section there are letters that can be added to children’s pictures, all the letters of the alphabet are provided. However, unfortunately they mix up lowercase and uppercase letters. This is not great as it can be confusing for children who are just learning to read and write. Hopefully this is something they will address in a future update.

This is a lovely app for children to play with and explore following their own agenda. Adults can encourage children to record a phrase or sentence to explain their creation before it is celebrated and shown to the class. As children become more familiar with it, they may start to share their own narratives and basic stories. It could also be used in more directed ways, for example, children could be encouraged to use it to tell a number story. Numbers and stamps could be used to build up a screen that describes the story they want to tell.

Overall, this is a great Early Years app.