The shortage of computing teachers in the UK is well-known. See, for instance, my article 5 Reasons There Is A Shortage Of Computing At School Master Teachers, And What We Can Do About It. But one of the dangers of the current apparent emphasis on computer science or, more accurately, ‘coding’, is that we’re not training young people to think critically (or creatively) about the wider issues, and we don’t need computing teachers for that 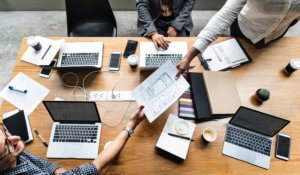 Collaboration is good, but we need poets too.
rawpixel-678089-unsplash

. Computational thinking isn’t enough. We need to be thinking about, and training young people and the next generation of teachers to think about, the wider ramifications of  the technology we’re currently creating.

At the moment, we seem to be in thrall to the creators of brilliant technology, who somehow think that technology can provide all the answers to our ills. The problem with that, though, is that much of the technology is made in their creator’s image, which is to say that the programmers behind many of the apps and programs we use seem to assume that everyone is just like them. That’s one of the reasons that we end up with many programs which contain implicit biases, as described in the books Weapons of Math Destruction and Technically Wrong.

It’s clearly important that we educate people to understand that programs may be very logical and internally consistent, but that they can also have built-in and hidden biases. However, I’d venture to suggest that it’s the poets of this world who, not being so tied up in the nitty gritty of code, protocols and procedure, paradoxically have a better view of the dangers than the people who are.

As an example, take the song by The Levellers called Is This Art? The lyrics are, I believe, based on a poem originally published, probably, in the late 60s. It takes the form of a technocrat showing someone all the brilliant facilities and developments afforded by technology. Each verse except the past one ends with the technocrat saying “Isn’t Nature wonderful?”, and the response, “Yes”, I said. “But is art?”

The last verse, which I am unable to discover on the internet, ends something like:

He showed me my prison cell, and my adaptation chart.

Then there’s The Unknown Citizen, by W. H. Auden, published nearly 80 years ago, in 1940. Read it, and see if you don’t think it sounds like a description of modern China.

In her latest book Machine Learning and Human Intelligence,Professor Rosemary Luckin makes a compelling case that we need to have a much broader approach to understanding the potential and ramifications of AI than a highly focused emphasis on programming. We need to develop our intelligence holistically. Indeed, she goes so far as to say that the creative and imaginative subjects like Art and Drama could usefully be strengthened in order to help us make the best use of this emerging technology.

It’s an interesting idea: the concerns over programs that make decisions without anyone (including the programs themselves) understanding how, and whether we will eventually become slaves to some all-powerful ‘artificial intelligence’ could be resolved by shifting our attention to the thing that human beings are really good at: being creative.