↓
Home→blog→Use of Game Making in primary and secondary schools
Helen Boulton writes…
I am very interested in how gaming is increasingly being used in teaching beyond computing classrooms. At the ITTE Conference held in Hull this year I presented a paper on behalf of a Horizon 2020 project I have been involved in where we have developed new game making software, Create@School.  It is similar to Scratch in that it has a brick interface.
The project involved schools in Austria who focussed on developing the involvement of girls in game making, Spain who were working with travellers, and the UK who focussed on children who were disaffected with learning and at risk of social exclusion or with profound special educational needs and disabilities. 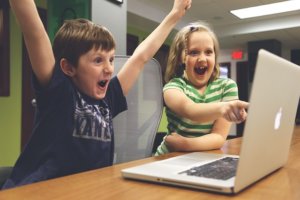 Nine hundred children were involved in the project.  In the UK we introduced game making in secondary schools Humanities, Science and PSHE, and in history, geography and English in primary schools. We are still compiling our findings, but can report that in the UK where we had 3 interventions at 4 schools over 18 months, students who were at risk of social exclusion and identified by the school as disaffected with learning, increased their persistence when using game making in lessons.  Engagement levels were also higher, particularly where students created their own artefacts, behaviour improved, cognitive skills and computational thinking skills improved, and there was evidence of a deeper understanding of subject knowledge.  We also found that learners with severe SEND preferred to have pre-set games as they found it difficult to remember the ordering of the bricks in creating the games.
The project has created a range of resources including full modules for different subjects, lesson plan templates, game making templates and resources to support teachers in developing skills in introducing and developing game making in their subject.  These resources are all free and are available at  https://www.Catrobat.org where you can also download Create@School.
We are in the process of writing an article on the project.  News of when this is published will be shared at itte.org.uk.