In case you don’t know, Bett is the annual ed tech trade show/conference which takes place each January here in the UK. It’s chief function is to provide us Brits with something to moan about — along with the weather. Well, I’m afraid to tell you that so far as that aspect is concerned, I’m going to disappoint. As one of the exhibitors, who I count as a friend, said to me:

“We keep complaining about Bett, but we still come back year after year!”

Well, quite. There are several reasons to keep coming back, and this year’s event satisfied all of them.

First, it’s a great way of discovering what’s new in terms of ed tech. Some of it is, in my opinion, completely impractical, some of it is sort of useful but not quite there yet, and some of it is more or less proof of concept. But some of it is nothing short of excellent. Take, for example, Microsoft’s built-in dictation (speech to text) feature, which is not only word perfect but which can be instantly translated into another language. Or Agree-online, designed to train kids in handling potential conflict situations online before they actually have to.

Secondly, it’s a good way of getting a feel for the ed tech zeitgeist, by ascertaining the main themes of the event (see below). You can read reports on the CES show, which happens just before Bett, but they will only give you a general picture of where technology is going. You can read the Horizon report, (which you should), but that takes time, as does reading the Open University’s excellent Innovating Pedagogy. Each of these indicates what’s on the cutting edge of education technology`, and are worth spending time on. But for a relatively quick glimpse at the landscape, Bett is best.

Thirdly, it’s the event at which new products and initiatives are launched. Thus at Bett 2018 we saw new products from Microsoft and Google, and the official launch of EDUCATE, which seeks to marry ed tech start-ups with education research. 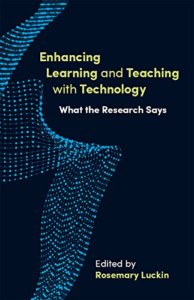 The first in a new series

That event also saw the official publication of Enhancing Teaching an Learning with Technology: What the Research Says, to which I contributed the introductory chapter. (That’s an Amazon affiliate link, by the way.) It’s the first book in a new series called What the research says about…. It’s a welcome addition to the literature on what works in education.

Fourthly, it’s a great place for networking and meeting up with colleagues. For example, one of the highlights for me this year was bumping into Gabriel Goldstein and Ken Dyson. They were the HMIs in charge of ICT years ago (HMI = Her Majesty’s Inspectorate). During my time as a teacher of ICT and Computing it was Gabriel first, followed by Ken, who in turn was followed by David Brown. Each of these was/is knowledgeable, approachable and extremely helpful. Even when they were probing and prodding, you always felt that it was a conversation between two professionals, not someone banging you over the head with a clipboard.

I mentioned earlier that Bett is useful for ascertaining themes and trends, and this year was no exception. I detected the following:

I’ll be writing about the products and services I saw in my newsletter, Digital Education.

You Gotta Have A Plan

One thing that becomes increasingly obvious to me each year is the need to go to Bett with a plan. I’m not referring to planning your time at the event, important though that is, but having an underlying ICT strategy.

To illustrate my point, I saw three or four products at Bett that seemed potentially useful. If I’d decided to purchase all of them on behalf of my school (if I worked in one), I’d have:

It’s really all about scale, and it seems to me the most sensible approach is to have an ICT strategy to provide guiding principles, and carry out an audit before spending anything. That’s a big topic, which I’ll leave for another article.

I said at the beginning of this article that I wasn’t going to moan, and I’m not, but there are a couple of things I’d very much like to see at Bett.

First, a carpet that actually functions as a carpet in terms of comfort, rather than merely changing the colour of the concrete floor. I made the mistake on the first day of Bett of not heeding my own advice. I wore smart shoes rather than really comfortable ones. Boy, were my feet killing me afterwards.

Secondly, the media lounge is great, admirably run by Mango Marketing, but what would make it even better would be a larger area with a bank of laptops or computers. I should have liked to have briefly updated my blog each day during the show, but I didn’t want to lug a laptop around with me. (I could have used a Kindle Fire, but it’s not great for writing much more than short texts or lists.)

I will be writing about the products and services I saw at Bett this year, in Digital Education, as I said earlier.